We would like to thank our Vice President Steve Bailey and family for coming up with this fun competition.

Our Judge was George Templeton of Knowe Ayrshires and his placings were Z,X,B,Y,C,A,

George has very kindly sent his reasons for everyone to read. Z was placed first for her overall balance and dairyness, she showed style and character but it was the snugness of the udder that helped her into top spot.

X followed on nicely in 2nd was a very similar type with a true heifer udder, although not the most powerfull has the dairyness and udder balance to put her above B.

B was a very milky type of animal, but it was the tightness of udder over Y that got her into third place.

Y this is probably the highest yielder in the class with a tremendous width and power, but the correctness of the teat placings was the reason she was placed over C.

C was placed 5th over A because her udder blended better into the body and was better on her legs than the last heifer A.

A this is a very milky heifer but could not be any higher this time.

We had a good entry and our Winner is Brent Crothers (Toi Toi), in joint 2nd was Kerr Lindsay (Harperfield) & Allan Clark (Fineview) with 3rd place going to Vera Allen (Droghed).

Again many thanks to the Bailey family for organising this and to all the competitors who entered. 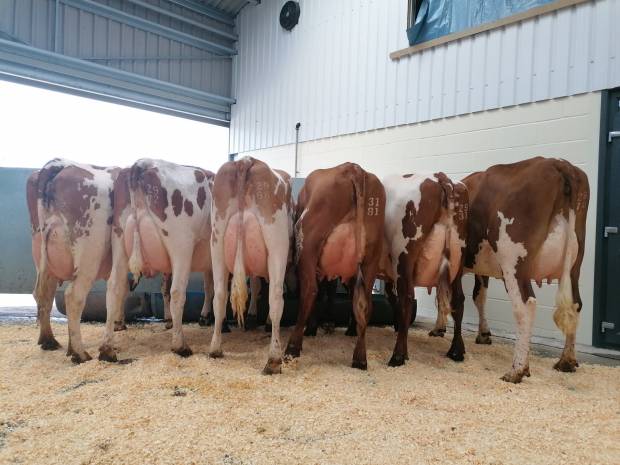 The Class of heifers at Beeline Ayrshires
Back to News List